While in São Paulo this past week, my main impression was that of the steep valuation of the local currency, the Real. I did not perform an extensive survey, but I was struck by the elevated prices of goods and services in São Paulo, especially when translated into U.S. dollar terms. The high costs implied by the prevailing exchange rate – which was about $0.62 per Real – were surprising for the obvious reason that Brazil is a developing nation, where the average income is less than one quarter that of the U.S. Yet it was also surprising even in relation to my experiences in developing nations in East and South Asia, where consumables and domestic services are generally more affordable. The Real is on the cusp of trading at its highest valuation in over a decade. Its valuation appears very well supported in the short run, but I question whether such conditions will prove sustainable. 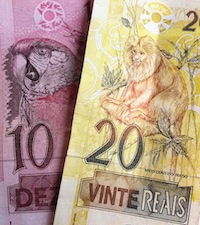 Foreign exchange markets have placed a premium on the Real for three straightforward reasons. First, like many other currencies in emerging markets, the Real’s valuation benefited indirectly from twin occurrences: from the default risk that has emerged in the Euro zone, and from fears related to substantial deficit spending in the U.S. Global investors have recently favored emerging market currencies over their developed market counterparts on the premise that the emerging economies were less indebted and more likely to enjoy higher rates of growth, and this has boosted currency values accordingly. Second, Brazil’s Real has benefited from growing confidence about its fiscal and political stability. In 1999, the country was swamped by its foreign debts, and this gave rise to political and economic turmoil, prompting a sharp devaluation in the currency (visible in the nearby chart). Yet over the past eight years Brazil has improved markedly on all three fronts – fiscal order, sustained growth, and political stability – and markets have duly restored some of the currency’s value.

However, there is a third reason for the currency’s strength, and it is arguably the most essential to the market’s valuation of the Real: the resurgent strength of the global commodity cycle. Brazil enjoys a resource rich economy, with surpluses in agricultural (“soft”) commodities, and in metals and ore (“hard” commodities). Due to large-scale extraction efforts underway, Brazil now produces enough oil to satisfy domestic demand, and it may soon export surplus petroleum products as well. In short, Brazil’s external economy is commodity-driven: according to the United Nation’s COMTRADE database, nearly two-thirds of its exports are commodities. Against a steady backdrop of demand of its resources, Brazil has grown its export volumes – led by its commodities – from 6%-7% of its economy 15 years ago, to well over 11% today. Thus Brazil is capable of exporting greater volumes than ever before, precisely when the demand for its commodities is strongest.

This would seem to be good news for the country, and it certainly underscores the Real’s strength. Yet I wonder whether such a steep valuation is desirable or sustainable. My concern arises from two interrelated issues. The first is that the high value of the Real seems to rest on potentially fickle foundations. I mentioned that the currency derives its strength from three sources – political stability, investors’ flight from developed currencies, and the global commodity cycle. Yet the latter two sources are external in nature, and have little to do with the innate structure of the Brazilian economy. The Real’s value is thus very dependent on global circumstances. All three of the cylinders in its engine are presently firing; but what if one or two stop suddenly?

My second source of concern is the more serious one: the strength of the Real may choke off the competitiveness of domestic manufacturing industries and the tradable service sector. Burdened by an expensive currency, Brazil’s manufacturers face tough competition from low cost imports from China and the U.S. Local industries may struggle to achieve proper scale; and without scale, the manufacturing base may not expand at pace to match Brazil’s large and surging domestic consumption. In order to satisfy demand, the country appears reliant on imported manufactures – and this could become a source of vulnerability, especially if the Real should weaken to the point where Brazil could no longer afford to pay for its imported goods.

Separately, I don’t believe either issue poses a fatal flaw for the Real. However, when taken together, they suggest fragile underpinnings for its current valuation: basically, the currency’s strength rests largely on external factors; and should the Real begin to weaken for whatever reason, Brazil will likely struggle with its import bill – and that circumstance would only accelerate the Real’s decline. This perspective casts new light on the Brazilian government’s attempt to stem the Real’s appreciation by taxing capital inflows. There is almost a degree of desperation behind the government’s efforts – policymakers are trying to keep the currency grounded, even as it already floats upon a delicate equilibrium. To be clear, I offer no predictions on the Real’s near-term direction, nor do I wish to imply a shock will occur. But given my concerns about the Real’s long-term sustainability, I do hope for the authorities’ success, even as their actions run contrary to my open-market instincts.