When you were young, which fable did you prefer: the farce behind the emperor’s new robes, or the comeuppance of the idle grasshopper? The former tale highlights the collective denial that sustained the hollow pronouncements over the emperor’s apparel, while the latter depicts a grasshopper that loafs during summer even as a wise ant prepares for winter. Though only fables, the stories hold relevance for the U.S. and Chinese bond markets, respectively. 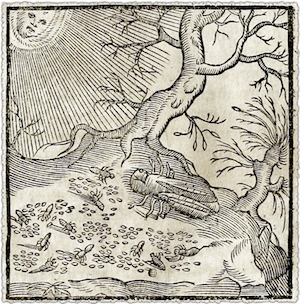 On Monday of this week, Standard & Poor’s downgraded its outlook for the U.S. long-term credit rating to “negative.” S&P cited the country’s rising indebtedness and the lack of a clear path to address its substantial fiscal deficits. Equity markets tumbled on the announcement, but bond markets went untouched—in fact, 10-year Treasury notes rose more than a quarter-point on the same day. By definition, S&P’s pronouncement was “news,” yet its impact on bond markets was hardly discernable.

For the past three years, S&P and its fellow credit rating agencies have been under a cloud, unable to escape entanglements from the financial crisis of 2008. Last week, a bi-partisan Senate panel found the agencies employed flawed models to rate the complex securities that were at the heart of the crisis.1 The panel further asserted the agencies played a central role in triggering the crisis: even though the agencies knew the U.S. housing market was deteriorating as early as 2003, they allowed flawed ratings on mortgage-related securities to persist. Eventually, the agencies were forced to reverse those ratings, but they did so via an unprecedented mass-downgrade, which spurred a market-wide panic.2 The panel’s conclusion was both obvious and damning. The rating industry suffers from an embedded conflict, where the issuer of a security also pays for the rating—and the “issuer-pays” model encourages the agencies to inflate their ratings in order to attract business.3

Given such inadequacies and inherent conflicts, it is little wonder that U.S. bond markets give little deference to the agencies’ ratings. It is as though the market long ago realized the emperor was exposed, and that pronouncements to the contrary were either self-serving or denying the obvious. However, as jaundiced as the U.S. rating system may be, it is still preferable to the situation in China.

China’s corporate bond market is fledgling, as are the rating agencies that oversee it. The most prominent agency there is called Dagong Global Credit Rating; whereas most western agencies have over a century of history behind them, Dagong was founded in the mid 1990s. To its credit, Dagong has attempted to build a reputation for tough, independent judgment: it is famous for rating the U.S. government several notches below its top grade. Nonetheless, China’s rating agencies don’t yet carry the weight that their U.S. counterparts still do—mainly because they lack independence from the Chinese government, and because the domestic investors they serve have little incentive to care about rigorous credit ratings.

The reason for this is relatively simple. Until only a few years ago, regulation in China required that nearly every corporate bond was guaranteed by a local bank; and where a bank did not offer an explicit guarantee, a government agency stood behind the bond with an implicit one.4 While this regulation has been relaxed over the past three years, especially for short-term bonds, a large part of the market still depends on such guarantees.5 In the event of default, Chinese investors expect that a government-backed bank or a government agency will be on the hook to make them whole. This arrangement has made the domestic bond market stable—at least so far—but it has also made it potentially precarious. Why would an investor go to the trouble to scrutinize a given bond, or seek an independent rating, when that bond has a sovereign-like guarantee behind it? Most domestic institutional investors, themselves new to credit markets, don’t see the need; thus ratings are mostly an afterthought.

The problem is that very few parties are doing any real homework on the bond market. In the event of a credit panic, few will possess the requisite knowledge, understanding or confidence to act as buyers during a time of crisis. If buyers are scant, liquidity will be in short supply, and the panic will deepen. Most domestic investors gloss over this, content that the central government will save the banks, and by proxy, them. China is enjoying an extended summer, and with luck, it will continue to introduce the sort of reforms that will stave off the worst of winter. Let’s hope so, because for the time being, China’s grasshoppers outnumber its ants.