The practice of banking according to Islamic principles, or “the Sharia” - the moral code and religious law of Islam - is relatively unknown within developed nations. However, in many parts of the developing world, Islamic banking is a burgeoning industry. It deserves closer scrutiny not only because it is bringing new and otherwise un-banked customers into the fold, but also because it serves as an alternative model for finance – and it may manage certain types of risk better than conventional Western models. To be sure, Islamic banking systems are currently small in size and less time-tested through multiple economic cycles than conventional models. Still, this relatively young model may have features to recommend it – not least because it offers a different approach towards managing balance sheet risks.

Fundamental to the Sharia is the concept of “Riba” where (simply put) the charging of interest, or an increase in capital without any services provided or risks taken, is forbidden. The Islamic model works on the basis of risk sharing. The customer and the bank share the risk of any investment on agreed terms and divide any profits or losses between them. This is true of deposits where returns are not guaranteed but where the customer authorizes a bank to invest deposited capital, understanding a portion of the associated risk is borne by the depositor. The industry’s growth has been challenged by this risk-sharing – some depositors are uncomfortable with the risk, despite their religious preferences – as well as the fact that Sharia-compliant banking laws are not yet standardized.

The transition from conventional balance sheets to Sharia compliant balance sheets begins with transforming all loans and deposits into non-interest bearing assets and liabilities. Focusing on the assets, a bank could utilize a tawarruq instrument to convert an existing loan (bearing interest) into a Sharia compatible instrument. The holder of the loan requests the bank to purchase a specific commodity (real asset) on his behalf. The client will repay the bank for this purchase plus an agreed margin in installments. The bank then sells the real asset in the spot market and passes the balance through to the client in the form of financing.

Over the past decade, Islamic banking has experienced significant growth as conventional banks transition to financial principles compliant with the Sharia. Malaysia was one of the first countries to adopt this model, creating an institution for Muslims to save for Hajj (pilgrimage to Mecca) expenses in 1963. Over the subsequent five decades, the Islamic model has evolved to make it more viable and competitive with conventional banking. Significant obstacles remain in its path – the lack of a Sharia-compliant legal framework tops the list - but Islamic banking benefits from the growing economic strength of Muslim countries, particularly those in the Gulf region (UAE, Saudi Arabia, Bahrain and Qatar), and their demand for alternative, viable financing sources.

Islamic banking’s evolution is likely to be a complex one, as the model intermingles with (and sometimes supplants) existing commercial banking systems. The model may not always be compliant with international banking practice and accounting standards. Even among leading Sharia institutions the issues are complicated, forcing them to seek out experts to interpret the intersection of Islamic law and banking practice. Goldman Sachs recently announced the launch of its first Islamic bond, a $2Bn sukuk or security designed to comply with Islamic law.1 Exotic by any standard, the issuance ran into multiple obstacles in Sharia compliance.

Increasing demand from Muslim populations has pushed bank practitioners and policy makers into new territory. Islamic investors who aim to diversify their portfolios across multiple geographies have supplemented this demand. With conventional financial systems under stress, Islamic finance may find room to expand. Malaysia Air, the country’s national airline, has announced that a portion of its $3.8 billion capital increase will tap the sukuk market, given pent up demand for Islamic instruments, and an offsetting decline in conventional liquidity sources due to the Eurozone crisis.2

It is estimated that there are $241Bn Sharia compliant banking assets in the exchange listed banks of the United Arab Emirates, Saudi Arabia, Bahrain, Qatar, Malaysia, Egypt, Kuwait and Jordan.3 This represents only 14% penetration of these countries’ listed banking assets. 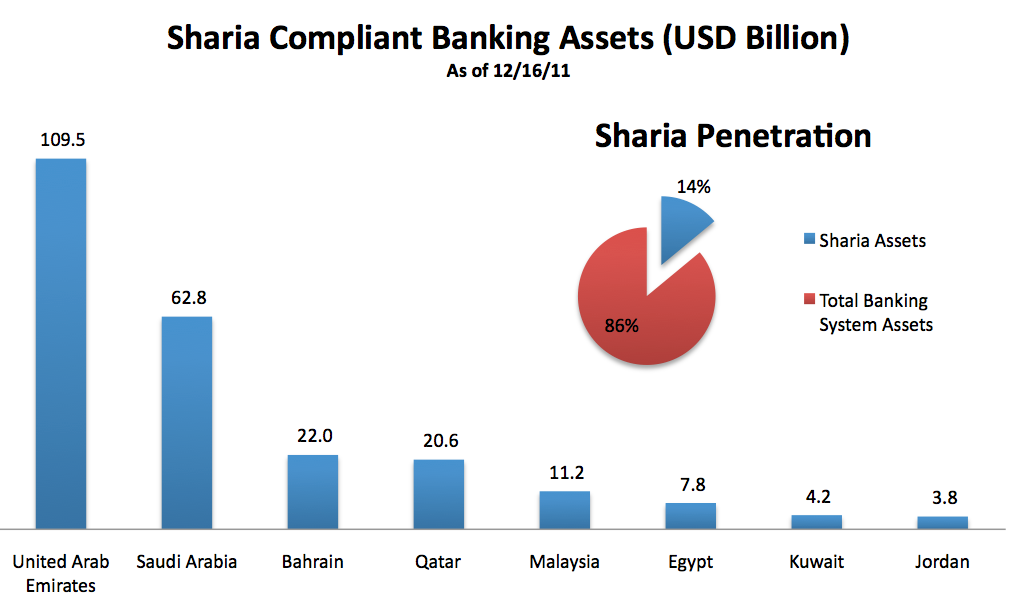 Whether you measure Islamic banking growth in terms of transitioning from conventional western standards or by Sharia product penetration among Muslim populations (estimated in the single digits) there is room for growth.

Growth does not come without risks. In my experience working with Asian banks, operational control and risk management functions are slow to match the pace of asset expansion. Seemingly simple controls such as defining non-performing loans uniformly and allocating capital to them can vary widely among countries. A task to transition whole balance sheets to Sharia law is daunting at best and at the end of the day, a redefinition of the balance sheet does not change its risk profile. The process might even create additional operational risk along the way.

However, as the current Eurozone crisis demonstrates, conventional finance has its own faults. One key fault – static risk grading – haunts us today. In 1992, major global banks had balance sheets comprised of 65% risk-weighed assets; by 2010, the ratio of risk-weighted assets to total assets fell below 40%.5 The decline in the perceived riskiness of balance sheets allowed banks to reduce their capital requirements in tandem; excess capital was paid out in management bonuses, dividends to shareholders and share buybacks. How did the banks accomplish this shift, even as their balance sheets swelled during the intervening years? One key method was to load up on euro-denominated sovereign debts, which under regulatory norms were awarded zero or near-zero risk weightings. However, as now we can attest, those bonds are far from risk-free; but European banks now have reduced capital resources to buffer the resulting risks. Risk grading was supposed to help quantify and manage balance sheet risk – instead, it wound up as a static classification system open to misuse (or even abuse).

Islamic finance is a new and relatively untested alternative. It will undoubtedly face its own challenges, especially in the developing world. However, its approach toward risk-sharing, in lieu of arbitrary and static risk-grading, may mitigate the sort of balance sheet pressures that beget solvency crises – like that unfolding in Europe today.